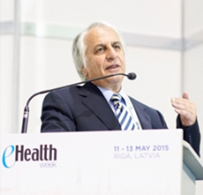 His research interests include eHealth, computational intelligence, medical informatics, diagnostic and prognostic systems, and system modeling & identification of brain activity. He published more than 150 research papers in International Scientific Journals, International Conferences, and Edited Book volumes. He is the Section Editor (eHealth) of the journal Technology and Health Care, served as area editor of the journal IEEE Transactions on Information Technology in Biomedicine, and member of the editorial board of the journal of Intelligent Systems. He is the founder of the Computational Intelligence lab and co-director of the eHealth lab of the University of Cyprus. He is one of the founders of RISE - Research Centre on Interactive Media Smart Systems and Emerging Technologies and member of the Board of Directors of RISE Ltd.

He has taken part in European Commission initiatives for promoting the Information Society, especially the Euro-Mediterranean partnership and the eHealth initiatives. He attends regularly as invited speaker the annual EU Ministerial Forum meeting on eHealth. He is since 2016 the national representative to EU for the SC1 (Health) HORIZON 2020 Program Committee Expert.